DEE NOLAN was born in the Limestone Coast region of South Australia, growing up at Gum Park, a farm established by her grandfather a century ago. 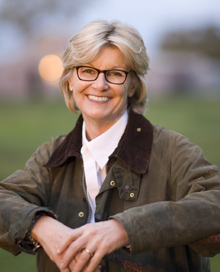 Dee Nolan at her home “Gum Park”, in South Australia.

An international career in journalism took her to London where she lived for 23 years before moving to work in New York.  Dee returned full-time to Gum Park in 2011.  The farm had been sold when her parents retired and two decades later, she and her husband John Southgate bought it back and now run a certified organic farm and a registered Babydoll sheep stud, South Glynde.  She has also written two books about the pilgrimage to Santiago de Compostela.

Dee trained as a newspaper reporter on the Melbourne Herald and went on to have a distinguished career as a senior newspaper executive and magazine editor on many of the world’s leading publications in London and New York. She was three times awarded Editor Of The Year by the British Society of Magazine Editors (BSME).

Her first book, A Food Lover’s Pilgrimage to Santiago de Compostela was recognised in the 2010 Gourmand World Cooks Awards as one of the Best Culinary Travel Books in the World. A second book followed –  A Food Lover’s Pilgrimage to France –  both books being published by the Lantern imprint of Penguin and reflecting Dee’s abiding interest in food, farming and history.