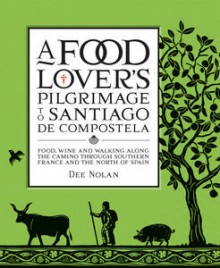 A thousand-year-old pilgrimage route and food traditions stretching back de toda la vida – since forever. These are what Dee Nolan sets out to experience on her first pilgrimage to Santiago de Compostela – through some of the rich farming lands of southern France and on the 800 kilometre  camino across northern Spain, green Spain. This joyful book tells the story of Dee’s camino, of the pilgrimage itself and of the food traditions that sustain us all. Following the route of those first pilgrims, Dee meets wise cooks and farmers who are finding that the future lies in the past. And she realises why, in our secular age, we are so captivated by this medieval Christian pilgrimage.

Dee’s own emotional journey along the Way of St James – el camino de Santiago – takes her back to the very heart of things: why we should care about what we eat and how it is produced, why we need escape valves like the pilgrimage in our busy modern lives, and why, back home in Australia, she has found herself, after a long career in publishing, back on her grandfather’s farm and connecting with the soil.

With stunning original photography by Earl Carter, this award-winning book comes complete with a detailed map, advice on planning a Santiago pilgrimage, a recommended reading list and helpful addresses.

Take a Look Inside

“A divine, fabric-bound hardcover tome of a South Australian writer’s journey along the ancient pilgrim route through southern France and northern Spain. Married with the lush photography of Melbourne’s Earl Carter, the mediaeval towns yield evocative scenes of cobbled courtyards and ancient recipes for limoncello, spring suckling lamb and loaves hot from the oven. Nolan describes her encounters with those harvesting the rich land for white asparagus, roasting razor clams or skimming ewe’s milk for cheese, then delves a level deeper to the connection with the centuries of pilgrims before her and the peace found when simply walking. A delicious tale that’s a feast for the eyes, mind and heart.”
The Sun Herald

“Penguin has published what, on first glance, is a coffee-table book for foodies with a northern Spanish flavour. But a first glance misses a lot. Dee Nolan’s book is certainly big: it weighs in at just under two kilograms; the recommended maximum weight to carry on the Camino is 10kg, so this is not a book for your pack. It is also beautiful, sumptuously so: the print is easy on the eye, the white space generous without being self-indulgently precious. Earl Carter’s photographs revel in their scale and effortlessly achieve the aim of all travel and food illustration: they’re romantic and seductive. The downside of such a heavy, sensually evocative book is that you won’t bother with the text. That would be a great pity. Nolan has written an informative and insightful account of her Camino and has neatly juggled that with her accounts of the meals eaten and recipes gleaned. It’s as comprehensively enjoyable and useful as anything I have read on the Camino.  Nolan’s reflections on the benefits of walking, for example, or on the enriching qualities of traditions are intelligent and convincing. And her remarks about footwear are the most useful I’ve come across. Her history of the Camino is digestibly broken up and scattered lightly throughout the book. Balancing the ingredients is the great challenge in writing about the Camino and Nolan has upped the degree of difficulty by sifting in food as well. And she’s got it just right.”
Gerard Windsor,  Spectrum/Sydney Morning Herald

“Nolan’s narrative is strong and engaging, and the production values of the book are very high, with wonderful photography by Earl Carter, and a series of intriguing recipes. The food tastes good and, satisfyingly, it has deep historical roots.”
Australian Bookseller & Publisher magazine, published at Boomerang Books

“The beauty of these images reaches deep. From southern France to Northern Spain the rural landscapes, architecture, food and faces are displayed in the context of a spiritually inspired walking trip. Nolan’s love affair with the past began with buying back the family farm in South Australia. Now she’s a seasoned guide to what survives from medieval Europe. A ‘change your life’ book to savour slowly.”
Country Style magazine

“Be you a foodie, armchair traveller or one of those whose camera didn’t work at that special place in Spain, you will love this book. Dee Nolan … longed to do the fabled Camino trek for years. Fate gave her the opportunity and she grabbed it. The result is this beautiful book, part history, part travel photography and part recipe collection of the foods found along the way. This book is almost as good as a trip to Spain.”
Manly Daily newspaper

“I’m not sure how it happened but Dee Nolan seems to be living my dream. Packing in the job and ditching the phone, ambling through small Spanish towns, stopping only to admire the odd medieval bridge or ancient forest. The former Fleet Street journalist has compiled a stunning 400-page record of her pilgrimage to Santiago de Compostela, recording culinary traditions and recipes and capturing the highlights in exquisite photographs from Earl Carter. I’m living the dream vicariously.”
Wish magazine, The Australian

“This is a sumptuous, stunningly presented book charting the romantic or spiritual pilgrimage of Australian journalist Dee Nolan through the north of Spain. For Nolan, it was largely about the food and the food producers, and, starting in France, she makes diversions to meet Pierre Oteiza, credited with saving the black-and-pink Basque pig from extinction, cheese producers and the men who dive for razor clams, and hunts out fantastic restaurants. There are recipes here, too, only a handful, but they’re the kind you want to cook… A Food Lover’s Pilgrimage to Santiago De Compostela is a large format and heavy book, the coffee table kind. In it, Nolan records her Spanish journey in detail, and more spectacularly, in photography with the photographs of Earl Carter. Nolan who grew up in South Australia, met her husband while living in London, and has now returned to buy her family farm is an engaging and professional writer and her story is engrossing in itself. But the photographs are the real star of this book, stunning renditions of a dramatic, green landscape and ancient, lush stone villages, beautiful animals and the Spanish people themselves. It’s the photography that makes you want to pull on the walking shoes and head over to soak up this romance, history and food for yourself. And in case you do, Nolan includes a detailed list of suggested hotels, restaurants, providores, wineries, tour operators and more. Just the kind of guidebook you need.”
Canberra Times

“The gorgeous apple-green colour of this book leaps off the shelf with its eye-catching embossed fabric cover. Inside, it’s even more of a surprise. Dee Nolan is a great writer and her love of food, combined with a growing fascination with the French and Spanish pilgrimage routes, inspired her to do two trips. Along the way she met up with Galicia-based guide Nancy Frey and her husband José Placer, who led her to some of the region’s beest-kept gourmet secrets. Earl Carter’s superb photographs of the route she took along El Camino de Santiago and through southern France and the north of Spain – green Spain – are classically beautiful, as are the images of the fresh produce and ancient farming practices along the way. For a route that dates back to medieval times, its continued popularity is astonishing and Nolan’s book makes it all the more interesting for those wanting to enjoy excellent restaurants, charcuteries, wine estates and charming places to stay. Recipe-wise, think traditional Santiago tart with ground almonds and lemon zest; Padrón peppers, mushroom and tarragon risotto; carpaccio of beetroot baked on a bed of salt with a pesto-type mix of walnut, Parmesan, garlic and olive oil; or shoulder of lamb done with dried olives and lemon”.
Woolworths Taste magazine, Book of the Month, March 2012